Bringing the Good News of Jesus Christ to Gloucester Point 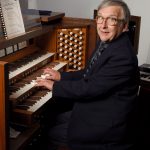 He set to music the entire Sermon on the Mount of Jesus Christ!

He composed some of the most majestic and deeply spiritual music ever created for the organ!

He was beloved by everyone who knew him and considered a saint by his many students and disciples!

On the 200th anniversary of his birth, César Franck is being celebrated around the world, and you are cordially invited to Bethany’s own gala birthday party on Sunday, December 11th at 4 P.M.!

The George Nelson Memorial Concert Series presents organist and pianist Rudy Shackelford, performing six major works in the “symphonic” style by César Franck, which revolutionized organ music in the 19th century.  Opening with his Heroic Piece, a hymn of spiritual triumph, the program includes the gentle Pastorale for Christmas; Prelude, Fugue and Variation in Franck’s seldom heard transcription for organ-piano duet; and Three Chorals, the last great testament of a composer who has been called “the French Bach.”

The music of César Franck is actually a synthesis of Bach’s masterful counterpoint and Beethoven’s architectural grandeur.  To celebrate Bethany’s 135th anniversary, Rudy Shackelford transcribed the finale of Beethoven’s last composition, the String Quartet No. 16, Opus 135, for organ-piano duet.  He performed its world première during the September 18th worship service, and you will have the opportunity to hear it again as part of the concert on December 11th.

So mark your calendar, come and be blessed right here at home by music you might have to travel to Washington or New York to experience!  Admission to the concert is free, however your generous donations of money and pet supplies will greatly enhance the life-saving endeavors of the Gloucester-Mathews Humane Society.